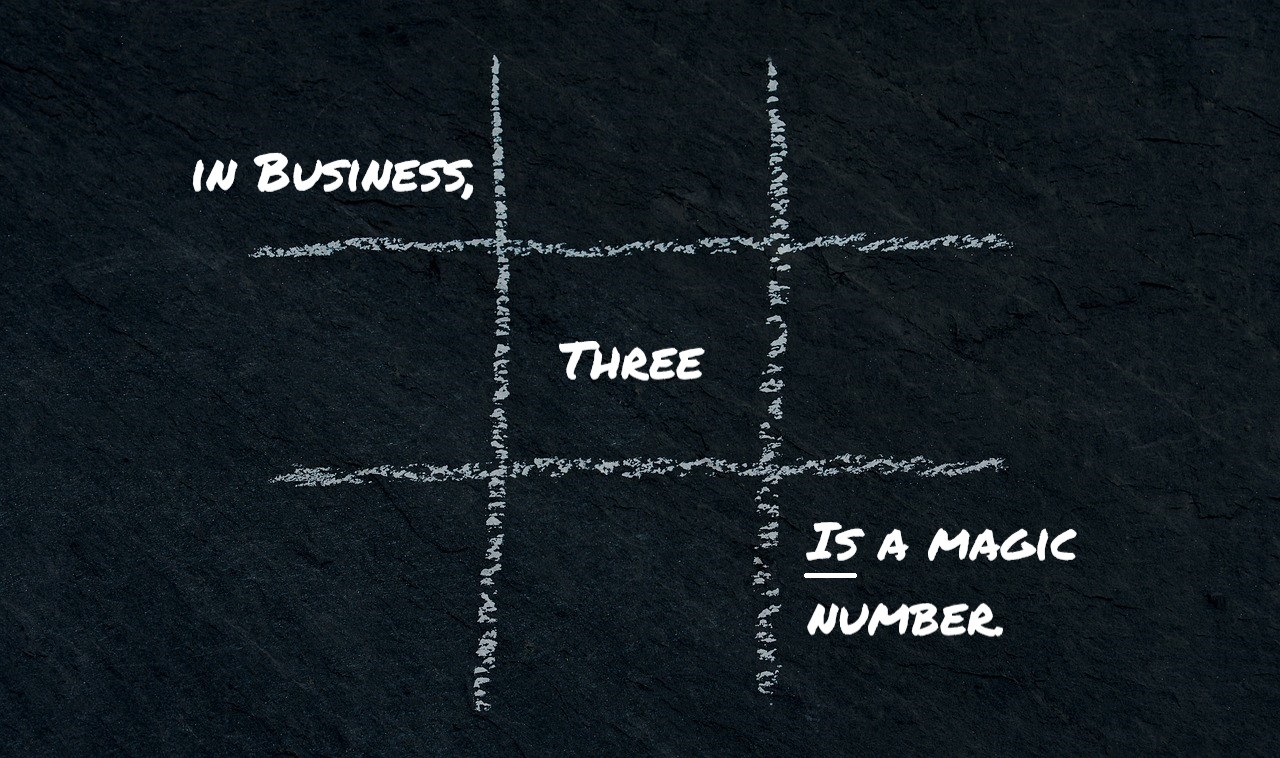 Let’s play a game. It’s a simple one. What’s your favourite number? Mine used to be four; the fourth letter of the alphabet and the first letter of my first name.

Without even noticing it, number three is everywhere. It’s around in science, literature, religion, architecture and many forms of culture as well as in our everyday speech.

And we live in a three-dimensional world, on the third rock from the sun; the triangle is the most robust shape in nature, and we use tri-angulation in GPS positioning. Three’s everywhere.

And it’s no coincidence either. Humans like patterns; three is the smallest number from which you can create a pattern.

Does three play a role in business? It does and here’s how.

Authors understand the rule of three. It makes things clear, concise and compelling. See what I did there?

It’s in Shakespeare plays - “Friends, Romans, Countrymen”; in movie titles – The Good, the Bad and the Ugly; in lyrics - Ian Dury’s ‘Sex and Drugs and Rock n' roll’. You can also use alliteration in three’s too; a Robust Regulatory Regime and a Comprehensive, Complete and Considered proposal, are two classic examples.

Speechwriters also use the magic of three. Sir Winston Churchill famously said "Never in the history of human endeavour has so much been owed by so many to so few" to create a historically memorable phrase. The rhythm; the lilting; the musicality of this phrase is stunning.

Similarly, as Professor Max Atkinson describes, in his influential book, Lend me your Ears, three-part lists help politicians elicit applause from their audience as they have ‘an air of unity and completeness about them’. Who can forget Tony Blair’s Education, Education, Education, for example? The phrase still resonates even today.

Did you know, three can forms the basis for jokes too? The model is “Establish, Reinforce and Surprise.” Or put another way “Set up a pattern, reinforce the pattern, subvert the pattern.

A great example today is webuyanycar.com, endorsed by TV personality, Phillip Schofield whose strapline is “So quick. So simple. So Schofield.” And don’t forget the classic joke format that uses three; “An Englishman, Irishman and Scotsman walk into a bar…”

Storytelling uses three too. Beginning, Middle and End. In presentations, this is translated as “Tell them what you’re going to tell then, Tell them... and then Tell them what you told them”. It’s a neat way of structuring a compelling pitch. Memorable too.

Printed materials and screen presentations themselves require three colours. At a base level that’s RGB or Red, Green and Blue. If you drop a drop of water on a smartphone, you’ll see the three colours of the LED in the screen.

Indeed, there is also the rule of thirds in photography and other visual arts. Visualise an imagine equally divided into nine equal parts (a three by three matrix, in effect). Rather than centring everything on an item of interest, putting it into a three by three grid creates tension, dynamism and focus.

Products aren’t immune to the magic of three either. Traditional sizing is in threes; Small, Medium and Large. Segmentation could be in threes; for example, Gold, Silver and Bronze services. Also, three-letter acronyms like TLA; they are everywhere. Four and five-letter acronyms exist but are much rarer. Three resonates.

In pricing even, in addition to the traditional Low, Medium and High pricing, the new emerging subscription models use the magic of three. That’s Good, Better and Best. Instead of offering one price, you offer three different prices for three different levels of value. For service agencies, it’s the number one technique of moving away from day or hourly rate selling.

In project management, you might use a RAG sheet. The Red, Amber and Green colours show different levels of risk. Red means there is a significant risk, amber means some risk and green says everything is on schedule and no action required.

Three is a core part of the human condition. The human brain clearly finds three things the most manageable and easiest to remember. It’s part of being human.

Perhaps the Romans cottoned on to the magic of three first.

"The Latin phrase 'omne trium perfectum' was key to the development of oratory. It means 'everything that comes in threes is perfect."

It’s everywhere, use it to your advantage and unleash the magic of three in your business!